Sometimes the most simple answer is the best one, though perhaps not the correct one.

After I had damaged sparking, unpredictable machines by putting myself between them in a closed room of around twenty to thirty spectators, many of those present had one or two things to ask and tell me about the element of danger: a threat to the safety of those present, and a personal risk to my own health.

One friend pointed out that if I were to seriously injure or suffer a fatal blow during my own performance, I would be remembered for doing something very stupid that was unintentional. For him, while elements of a performance address risk and chance, it is approached from an interest in sound as an artform. The context is not performance or body art; I am not asking great questions about my bodily vessel and its representation. Since I have not adequately asked these questions with sufficient clarity, a unintentionally wrong turn would be a gross mistake. So should I pursue the context of contemporary performance art or withdraw behind a control panel? Neither seems an inviting option.

Though as I am both a fifth-rate performance and sound artist, I feel the need to choose between these roles and delineate a form compromises things. Aligning with either warrants a discourse and context that determine the rules of engagement. It seems much easier to do away with titles that concern how any work is received. It seems easier to take the concerns of spectators out all together. Though the seperation of audience and performer is elastic.

It is not simply about the sound generated, the movements of the machines or a performance among them.

And what about the safety of others? And how do you cut back the risk to an audience member if it seems to be clear that confrontation is the overriding factor of interest?

In a climate where comfort is equated with safety and safety is equated with surveillance, it seems that we are being asked to plastic wrap and guard everything as a token of communal diligence. To be altruistic is to contain the bubble. Risk is a very selfish thing. Another friend felt that to be fatalistic would be to blame those in harms way on their interaction, the individuals decision.

Perhaps pulling back the confrontation means to keep it as a semblance and possibly a representation. Perhaps it is an unnecessary worry until the worst occurs. 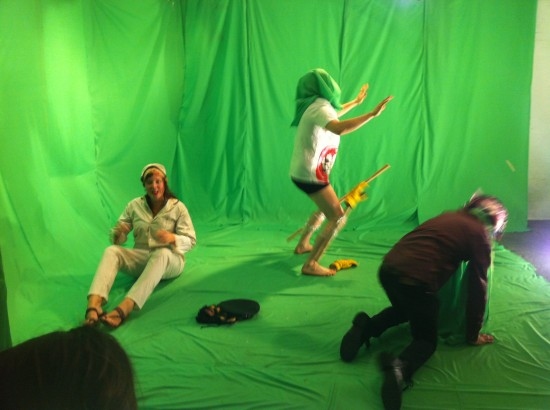 Towards the end of the night (photo by Harriet Body) 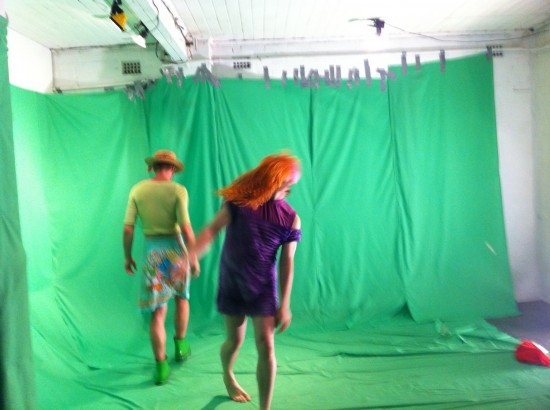 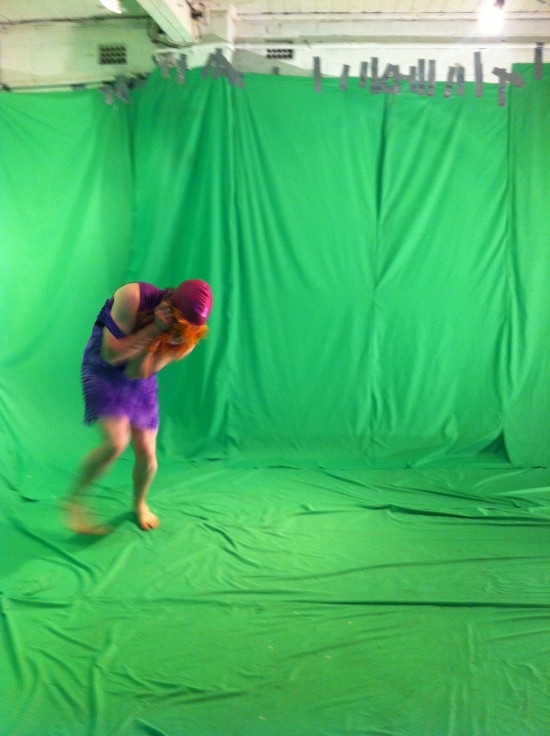 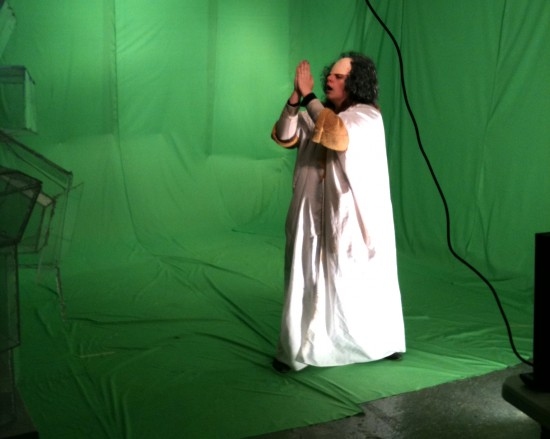 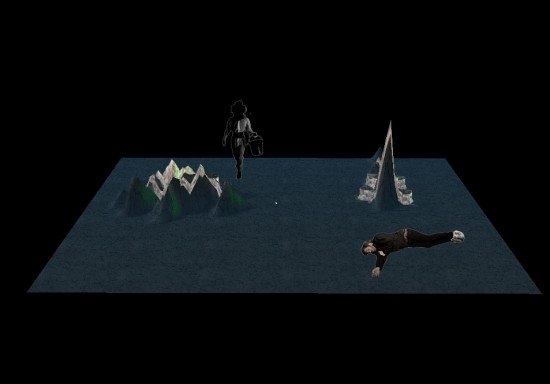 The Traveller who Lies and Steals with Heath in a recreation of Zhao Mengfu's Autumn Colours on the Qiao and Hua Mountains, made using Starcraft II's Map Editor

Unpaid Extras – What goes on film stays on film…

To all the lovely people who came and performed for us on Friday night ¨C thank you so much! I think we ended up with about 3 solid hours of footage. For those of you who saw the test films we had showing, they were all based on 12 solid seconds of loops, so we have enough to keep us busy for a while.

As has been the way with this three-week stint, things have had a habit of working out. From the commencement of our little soiree, it took Jodie Whalen all of about 45 seconds to have draped herself in white bed sheet with a receding hairline/fuzz mullet wig and begun to bless the green screen. In a couple of minutes she was joined by Nat OˇŻConnor doing some kind of Children of the Corn in a Hoodie dance-off. As the hoodie derives from the Catholic Cowl of the Middle Ages ¨C NatˇŻs reply to JodieˇŻs consecration was – as one could only expect – very well considered.

Other highlights of the evening included Sean MurphyˇŻs unbelievable performance as an armless monstrosity with enormous shoulders constructed out of cardboard tubes. There was judo fighting, disembodied heads, and comfortable amount of the jaw-dropping boogie. During the week weˇŻll go through the tapes and upload some of the more ridiculous moments that may have otherwise been missed by these immersed hosts.

Thanks again to everyone who came along and made the night so much fun!

Pete’s Traveller Who Lies and Steals with Heath’s appreciative fan from Wundercloset (We also borrowed the terrain and the Thor Juggernaut from the beautiful Starcraft II Campaign Editor. We’ll give it back though, promise.) 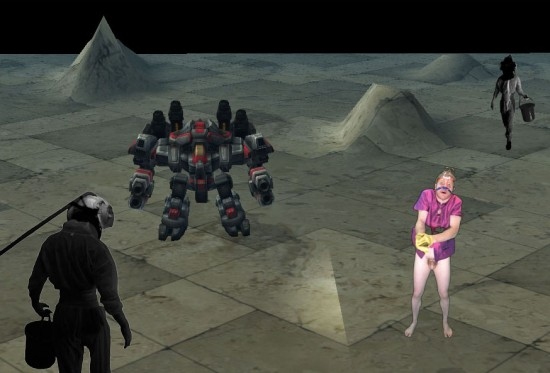 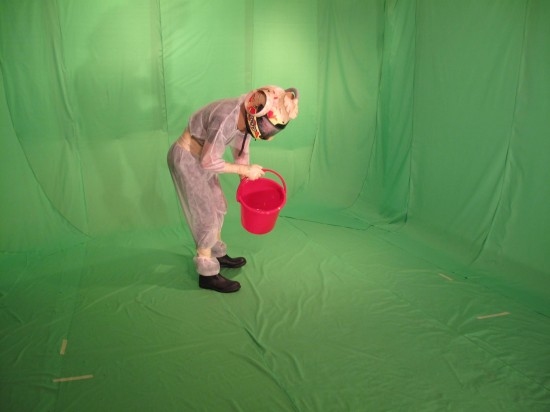 Heath and I moved in on Monday morning. We sat around the small table towards the back of the space, making various murmurings about where to get started. Although we have known each other for a number of years, at numerous points during the day we kept reminding each other how we usually work alone, and were not quite sure how to use one anotherˇŻs abilities, ideas, energy, etc. For both of us, it seemed to be a matter of getting the ball rolling without squashing each otherˇŻs toes.

After about an hour of chatting, we arrived at out our fundamental collaborative idea. I had been talking about the benefits of parallel perspective systems that create endless spaces, in this case for one of my characters to walk through. Heath was looking around the space at good places to set up a green screen. We arrived at a concept whereby we have an entire corner of serial space -floor and walls- covered in green fabric such that it creates a 3 x 3m floor-space where a figure can walk around and be filmed. If we counteracted certain effects of scaling produced by the camera, we can copy and paste that floor-space ad infinitum, resulting in an endlessly extendable video environment.

We built the green screen room and shot a test. It had a few expected bumps in it, but it was otherwise a resounding success. So thatˇŻs where we have got to in this first week ¨C an idea, a test, a result, and now what to make with it? 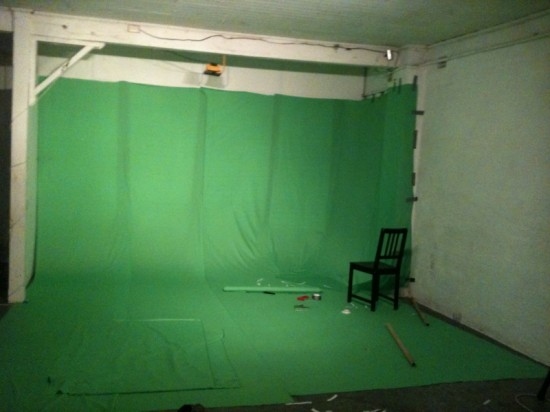